You might ask why I have included the picture below of a black bin liner full of rubbish. We went on litter picking duty again at the weekend. 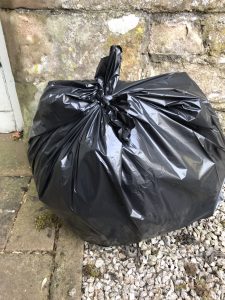 We collected this lot over a half mile stretch of country road near to where we live. It didn’t take long but it is very depressing. We go out every now and again to do this and I sometimes go out with the dog and a bag to pick up litter as I go. It never stops, the detritus that a small number of people just throw out of the car window. Our son said it was fun, collecting other people’s muck and I know what he means. It does give you a sense of achievement, if just a small one. However wouldn’t it be better if the person who threw out 6 beer cans just took them home and put them in the bin?!